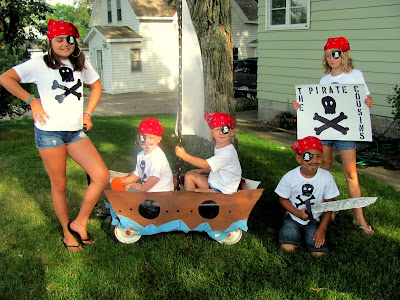 Check out pics from today here!!
Even though I had lots to do today, it was SUPER fun. ALL (or at least most..) of the activities were tons of fun! :) 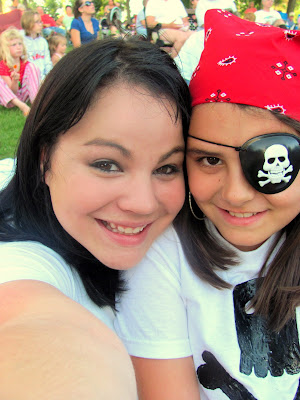 I designed a pirate ship, and recycled the pirate costumes so that we could be in our towns kiddie parade! The kids were so awesome! They kept shouting "AHOY MATEY!!!"
Afterwards there was a Kiddie concert in the park. The band "Jim and Terry" was awesome. They sang tons of pre-school songs, and oldies. The kids had a blast singing and dancing along. Aidyn and the little were the first to dance, and got their pictures taken by the paper! The lady came over after to ask for their names and ages! We'll be looking for their picture in the upcoming edition!! :)
All and all it was a busy and successful day! Full of laughter, games, slushies, messy faces, and memories! Seriously what a great summer! 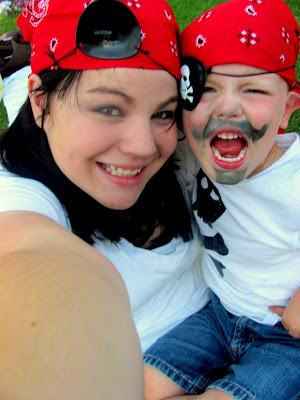 what a cool idea!

I love your pirate costumes. thats good that you were able to recycle them for more fun

:) Thats awesome about aidyn being in the paper. Keep your eyes peeled for it and keep that article!

HAHA pirate parade - super cute! I love the first photo so much :)

Sounds so fun and I love the pirate theme. Too cute. Seriously, you all should be pirates in real life....you are that cute as pirates :) That was a compliment :)

This is the cutest thing ever! I love the little pirate ship :)

Awesomeness for them! Who would think of such a thing? I don't think we have things like that around here...

holy moly that is freaking awesome!!