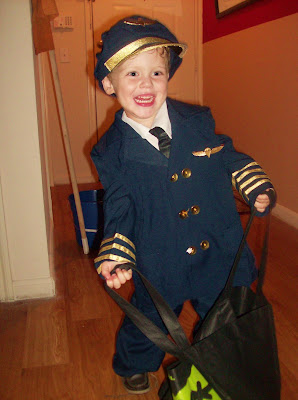 Yesterday night I was having a conversation with a friend, when the topic of Aidyn was brought up. (as of course it often does.) We got to talking about how smart he is. The way he thinks and processes information is amazing. He melts my heart with the things that he says, and how he says them. Although most of it is pretty accurate one of the funniest moments so far happened on the way home at the airport this last time.

After getting through security, which ended up being a slight nightmare, we found a Mc.Donalds. We settled in for some lunch (I know, again not healthy, but he's two, and those golden arches called his name.) In the middle of eating a pilot walked by with his tray. This is the conversation that took place VERY LOUDLY afterwards:
Aidyn: MOM.. MOM.. MOMMMMMYYYYY!
Me: Yes, Aidyn?
Aidyn: A pilot! Look.. look a pilot!
Me: How cool is that? Now eat your french fries. We don't have much time.
The pilot sits down and takes off his hat and sets it on his luggage.
Aidyn: No. No pilot, don't take off your hat! No!
Me: SHHHHHHH! Eat!
Aidyn: No. No eat food. Pilots don't eat food! Go back to your plane pilot!
Me: Seriously Aidyn, eat your food and be quiet! (slightly covering my face and sneaking glances to make sure the pilot couldn't hear us!)
We left moments later. I realized to Aidyn that Pilots are his heroes! He thinks of them the same way other kids think of Superman. I don't think he quite grasps that they are humans yet!
His spirit is so sweet, and daily he shows me what love is. God is so good. I am so thankful that God has given me the gift of motherhood. That he blessed me with this child. The child that was meant to be MINE. He chose him for me! God is good. :)
*Picture taken Halloween 09'

Ok, he is just way too cute for words! Maybe he'll be a future pilot ;) Love the conversation lol

Oh you just got to love it! Your love of motherhood is a breath of fresh air!

I am related to several people, who unfortunately, take for granted this very special gift and just don't know what they are missing.

Aidyn is very blessed and so are your readers for getting a chance to share in your slice of heaven. Thanks Brittany!

hOW Adorable Brittany! What a cutie your little guy is. He can look up to pilots all he wants, they are heros, as the travel millions of people around the world safely every day. Its a huge responsibility. I can tell you are a great mother.. and Mcd'S IS just fine.. they do have apples now too! SO they are moving up... HA! JGG

SO adorable! I have no idea what I did to deserve my little dude!

I am so sorry I haven't been to your blog in a while. I had to hunt you down because it got lost from my reader being so full! Lol!

What a sweet little picture!! and that conversation...how cute!! He really can think, thats for sure!!