Today is Aidyn's last day here (for a month). He leaves tonight to go with his Grandmother. They are staying in Jax until tomorrow morning, then they'll be flying back to the midwest. So at last minute (since his departure is last minute) I decided to take the day off of work. I talked to a few of the subs, and although it took three of them, they made it work. I had the whole entire day to spend with my boog :)!
I had planned to spend the day in bed. Cuddling, watching doodle bops (his fav!), making a frozen pizza (that he picked out), decorating a ginger bread house, etc... but that planned was ruined. My (ex) step mom is moving out today, and since there is a lot of family drama between myself and her and her children we decided our "home" probably wasn't the best idea. Plan B?
We slept in and got ready for the day. I didn't quite know what we were going to do, but I knew I had to make it fun. What are your options on a Thursday afternoon? THE PARK! Aidyn and I headed to our favorite park. It has several different playgrounds for different ages, lots of walking trails, and tons of kids. We left around ten a.m. and Aidyn was thrilled. We spent about an hour playing on all the slides, climbing, jumping, and rideing the merry-go-round. He made lots of new "Friends".
After an hour of playing (and little breakfast) we were both hungry. I told him he could pick anywhere he wanted. You know what he picked?
Mc.Donalds! (Of course)
So on we went, on to the second part of our adventure. Aidyn got a cheese burger kids meal (which he barely ate) and I got a chicken sandwhich. We had fun laughing and being silly. :) This is after three tries.. My phones camera isn't that great.. :) He was smiling for the first couple! 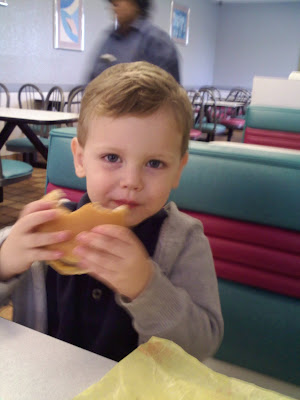 On a whim I decided we were going to the movies. Aidyn did really great the first time so I wasn't too worried. We went to Alien 51 :). I'd give it a B for adults and a C for kids. It was pretty funny, but Aidyn was more into the previews then the actual movie. We spent the first half cuddeling, and the second half Aidyn had fun climbing on the seats and walking up and down the Isles. I would never allow this, but we were the only ones in the theatre. (minus a family that came and only stayed for about a half hour) I spent 14 dollars plus popcorn, so by-god I was going to see the entire movie! 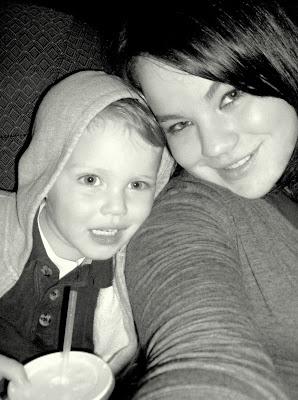 After the movie it was OBVIOUS it was time for a nap. So we swung by my school to drop something off for FB, and then headed home to hit the hay. (where we are now) He fell asleep after two minutes (of telling me he wasn't tired). I have a few more things to pack, and then once he wakes up, its of to Jax.

I'm still torn. I know i'll cry, and I am going to miss him SO much. It helps that it will only be a month opposed to two months, but it's still hard. It never does hit me until a few days into it, and so i'm sure you will all get a depressing post by the end of next week! (stay tuned!) For now, i'm going to lay down and soak up every last second of Aidyn-time I have left. Smelling his hair, hugging him, kissing him, and just cuddeling next to him. :)

Hope your day was a perfect as mine was... with a less sad ending of course!

This looks like a PERFECT day together. :)
I wish you guys were closer....take care...you will be fine and so will he.

What an awesome way to spend a day! It is the type of thing that will be remembered forever. Even if the details of it are forgotten, the joy that was felt will last a lifetime!

You are such a good mom. I understand the sacrafice you are making all too well. I understand this it's not easy letting go and giving Aidyn this gift. Bless you honey....to the moon and back...
XXXXX

Oh my gosh, you are seriously THE BEST mom ever....I know it will be hard, but enjoy the time to take care of yourself and be refreshed by the time he gets back.

Sometimes I WISH I had a month off. =)