Take me out to the crowd. By me some peanuts and cracker jacks. I don't care if I ever get back. For its root-root-root for the home team, if they don't win its a shame. For its 1-2-3 strikes you're out at the old ball gaaaammmmeeee!!!! "
Saturday morning my mom knocked on my door with a surprise. We were going to a Twins game! WOOHOO! I was so excited that I jumped out of bed and started getting ready. It didn't take us long before we kissed my niece and nephew and we were out the door. On our way to the game.
We met up with my two uncles, (which made it all the better) and drove down to the dome. This will be the last year (and my last game) played at the dome. Next year the Twins will be playing in the much anticipated outdoor stadium. I was thrilled to be able to make one last game in the old stomping grounds. Plus I try and make AT LEAST one game a year. Being in FL this baseball season has sort of kept that impossible! So, as you can assume I was tickled to be going.
We got to the stadium a few hours early so we could eat some good food, play a few games, and people watch. WE LOVE TO PEOPLE WATCH! Especially when there is a mass of people. We laughed and poked each other when we saw something funny. My mother and I have this wonderful way of looking at each other and we can tell what the other one is thinking. We burst out laughing, and every one else just looks at us like we are nuts. Ice cold beer only adds to the fun. So of course we had a few beers! mmmmmmm! 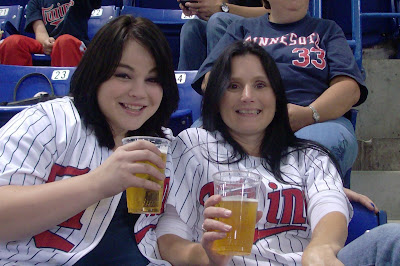 Finally we got to our seats. We settled in for a nice long game of Minnesota baseball... Only we never actually got to sit down for longer then a few seconds. Since my bright idea was to sit on the end.. because of course it would be easier if we had to go the bathroom. Only we never actually got out of our seats once the game started. BUT of course every other person in our row had to get up 10 times each to pee-get hot dogs-get beer-get t-shirts-drive us crazy! So we were up and down more then a Catholic Sunday service. It was good exercise I guess! :) 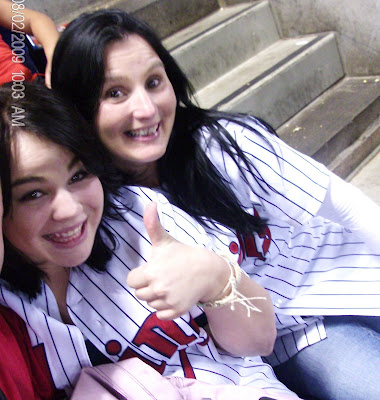 The game started out exciting. We had some good hits. Stayed in the game until about the 3rd inning. (ya it was a close one! lol) but after a while, the innings got longer.... the score got worse and worse... and we got loopier and loopier.. Soon my mother and I brought out the old camera. We acted like 13 year old girls and took funny pictures. Of course my uncle wanted in on the action and we couldn't deny him :) 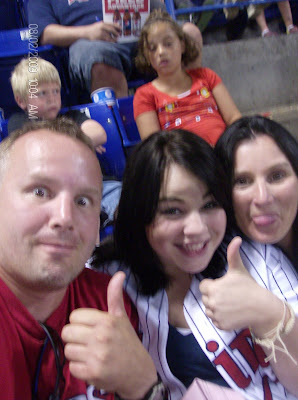 Once the game was coming to an end, the score board was not in our favor. In the last inning I think we need 5 or 6 runs to even tie it. So being the great Twins fans (who didn't leave like the thousands of you who did....you know who you are!!!) we are we stayed til the ninth, and put on our rally caps! (well me and uncle Jerry did..since we were the only ones in the group with hats!) But... it didn't make much of a difference. We lost..... with pride! 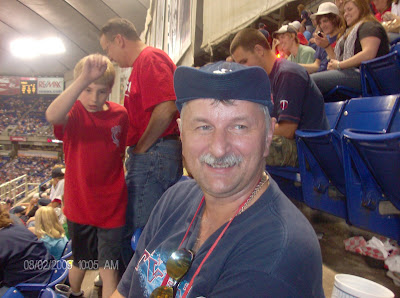 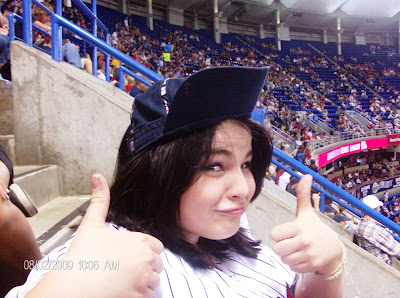 Then we did what any true baseball fans do....... we went out for beer and appetizers :)!
It was a wonderful day at the game.. and an even better one with family. I almost forgot to think about Aidyn... well almost.
(to see all the baseball game photos feel free to check them out here: Baseball game photos)

So glad you had fun...even if your team did not win. Love seeing you and your Mom having fun!!!