Aidyn-man and his cousin love playing in the bath together. In fact they would stay in the tub for hours if I let them. On days like today, that is no problem. J (who is four) goes to pre-school on Tuesdays and Fridays. So in the morning, its just the two of them. Today I filled the bath up with lots of bubbles and all there favorite toys.

They played car wash, and made food for all their animals. Aidyns favorites are the dolphins and the ducks. They were having so much fun, and being so good, that I let them stay in there until they were wrinkled. I stepped out for less then a minute to grab a towel and some clothes for the kids. When I came back the side of the tub was covered in red.
Aidyn had cut his lip open. It was under his lip, and it was bubbling out blood. It wasn't deep. In fact I don't even think he fell and cut it. He said he cut it on a toy. It wasn't deep, but it WOULD NOT stop bleeding.
I held a towel on for a second, and it soaked through. So I moved him to the couch and put a wash cloth and ice on his lip.
Still nothing. It continued to bleed. UGH!
All the while, Aidyn is insisting that he is fine. In fact he never cried once. He said it didn't even hurt. He was more upset that he had to lay on the couch while his cousins played. (by this time J was home..)
Eventually I just got out a band aid, and placed it right over his lip! It looks uncomfortable, but he is much happier being able to play then sit on the couch. 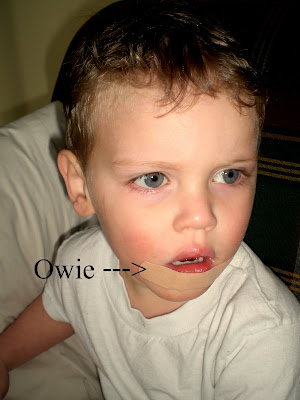 I hate when Aidyn is hurt. It breaks my heart when I can't make it better instantly. I know that with my active little boy, this is only the beginning. He is in for a life time of bumps, bruises, owies, and ouches, but that doesn't mean I'll ever get used to it! I swear this kid will give me grey hairs long before I should!
Thank God for band aids and hair dye!

Yes' kids will certainly give us mini heart attacks and grey hairs before we are ready! That must of been so scary to see blood.. instant panick. Glad he is a toughy and ok! ;) P.S. BUBBLE BATHS ARE FUN TOO!

this kid is GORGOUS

Poor little chap. My daughter (18 months) bit her tongue for the first time the other day, it was quite upsetting to see all the blood and tears!

Just for future reference, face/head injuries bleed a lot because being the house to 4/5 of your senses, the brain, and lots of complex muscles, there's a lot of blood flowing around. The best way to stop it is with the three Ps:
Paper towels
Pressure
Patience

Boy Scouts is STILL the most useful thing I've ever done!

Bummer! It pains us more than them! Poor babies!! At least they have great mama's to take care of em!

David is right. Even the smallest of cuts on a head will bleed like crazy. Trust me, it always looks much worse than it really is. Glad he is ok.