So I have this Marilyn Monroe wig from college.

Its this blond classy-hot mess!

Its pretty much a Halloween whore.

Its made its rounds.

Now its retired to the kids dress up closet.

Today in a moment of boredom, I convinced Aidyn to put it on.

It was too funny!

So next I convinced him to:
A) Don the MM dress
B) Put on make up
C) Keep the wig on

He looked at himself in the mirror and said...

"I look like a girl!" he said with obvious distaste

"Thanks a lot!" I scoffed "Now lets go show Grandma!"

I had to carry him up the stairs, but like the true showman he is, he played along.

He kept the wig and necklace on long enough for my mom to have a good laugh, then he threw the wig on the couch.

I made him put it back on to show his cousins.

Then he'd had enough!

He started pulling off the dress faster then a drunken college chick!
(I blame it on the blonde wig! lol just kidding!)

"NO WAY! I am NOT wearing this girly stuff NO MORE!" He shouted at me.

"Why not?" I pleaded "Just a few more seconds!"

"No way!" he said firmly while trying to unknot the dress..

"Okay fine! I'll give you a piece of chocolate if you let me take your picture!"

"Okay. IF you let me pick my own treat from the candy bowl!"

So he stood there long enough for me to get one picture. 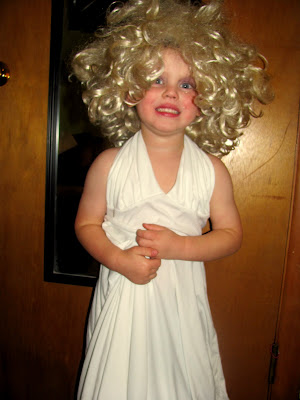 Then off with the clothes.

He couldn't get it off fast enough.

Then he begged me to take the make up off.

I did, and then I captured this video:

He is obviously traumatized!

but really, isn't that what childhood is for?

I mean I have to give him SOMETHING to talk with his future psychiatrist about, right?

P.s. This is TOTALLY going to be framed if he acts up as a teenager!

Haha too funny! And I love that you have to give his future psychiatrist something to go on. Isn't that the goal for all parents?

First off - it is so cute! And second (not to go all psychology/sociology on you) how crazy is it that he is already socialized into a gender role "yuck, only girls wear makeup" at such a young age! I think dressing him up is actually great for him. If we continue to separate little boys from little girls and give them roles, we'll never fully be equal.

Thanks Aidyn for the smiles! And how cute is he when he says he only likes mommy! I die!

Awe what a sweet video! That was too funny though!

THIS is the whole point of parenting. If you can't get the goods to either put them in therapy or embarrass them later on... you have failed.

And I'm not sure what this says about me...but Jackson totally LOVES dressing up. He even has his own makeup and purse. Is this wrong or just really awesome?

Ah ha ha!! He's going to hate you for this later!! That video is awesome.

That's hilarious! You gotta keep those to show his future girlfriends!! Love it!

By the way, you've got some blog love waiting on ya! Come see!

Hahaha! He should have held out for 2 pieces of candy. Lol.

ROFL!!! when he pisses you off in high school threaten that you'll photo copy it and post it all over his high school with is name in big bold rainbow letters so it catches a lot of attention! ROFL OMG i have to do this ! best blackmail EVER!

That is great!!!! Atleast now you know if you ever have a baby girl she will be cute as a button, just like her big brother! :)

Hahahaha, this is sooo funny! I love how he says "No! It was WEIRD!" I could not stop smiling!

hahaha that is amazing! definitely good black mail to have for the teenage years! And the video is too cute! I love how he back tracked and said he loved you. He's a smart boy.

thank you for the smiles!

What a good sport! Too funny that he bargained for his choice of candy.

He is such a cutie. What a fun video. thanks for sharing!

That VIDEO is SO cute/funny!! haha!