Thursday I stayed up all night, preparing for our trip. Since we had to leave for the airport at 4:30 am, I decided that I would be more tired if I slept. So starting out on this little adventure, I was already at "E" (empty). I got Aidyn dressed in his sleep, and left him sleeping til the moment we walked out the door. He was half sleeping as he walked down the steps, and said goodbye to everyone. His hair was all over the place, and he still had sleep marks all over his face. He was in good spirits until I put him in his car seat. Then he got whiney. If anyone knows me, I'd rather him screaming-crying then whiney. It gets on my last nerve. So not only was I sleep deprived, but I had to listen to him whine, all the way to the airport. grrrrr...


My dad hugged us goodbye and told Aidyn to be a big boy. I shot back that there was no way he was going to be good, and that this was going to be a miserable trip, I didnt even want to go, and I was going to melt into a puddle of tears if he started screaming on the airplane. My dad rolled his eyes at my dramatics... but I was certain it was going to be a horrible trip..


Well... I was.... WRONG :) Thank God! Aidyn was a peach! I got him really excited for the trip, and soon he was squeeling. From the first airplane we said goodbye to everyone (and their brother) we knew in FL. Then we talked about everyone we were going to see. After that we watched Doodle bops for a few minutes, until he got distracted with the women behind us. He is such a flirt, and they were eating him up. I wasnt about to tell him to stop, and chance a fit on an airplane.. plus who am I to stop him while he's working his magic :) . He is a woman charmer! After that we sang songs, talked to the guy next to us, had "teets" (treats), and looked out the window. We also looked for "moe" everywhere. This is his new favorite game. It came from the doodle bops where they look for moe at the beginning of the show. Now he goes all around the house looking for moe. It keeps him busy. So on the first plane he was busy, but WONDERFUL.. Then as we were landing.....


I pointed out a police car that was driving on one of the roads. As we got closer to land Aidyn also seen it.. and what comes out of his mouth?

Everyone looked at me.. I was embarassed. I have never actually said that phrase, and i'm concerned about who he's around that says "oh no a cop" enough times that he now thinks of that when he see's one... so then I had to say...

"No Aidyn, cops are nice. They help us. Do you remember Uncle Tom was a cop? Yup, he's a nice guy. We like cops." Loud enough so the people looking at me could hear that I wasn't a horrible person, or on the run.


After a while the attention got turned to getting luggage, and off me. Phew.


We then had what I thought was 45 minutes before we had to be on the next plane. Typicaly when I change planes, the next plane is only a few feet away. WELL.. not this time. So after I purchased some chicken nuggets for Aidyn, we set off for our gate. Unfortunately we had to get on a little trolly to get jetted over to a completely different side of the airport. then we had to run to get there because I noticed everyone was already almost boarded. So with a mc donalds bag, two cups, my purse, aidyns back pack and Aidyn I'm rushing towards our gate. Guiding aidyn with my foot. At one point he almost ran in front of two electronic carts, and I had to stop him with my foot, but kicking him in the butt. Again several people looked at me. At one point a woman said "bless you child." I smiled.. and thought... No crap!


Finally we made it on to the second and final plane. It was less crowded, and the seats were a lot bigger. More space in front of the seats, and it seemed a lot nicer. I was relieved. The young woman sitting in our row was very nice, and when no one seeemed to be seated near us, she volunteered to move over so Aidyn could have his own seat. Aidyn loved her, and kept trying to touch her. I had to keep stopping him. As nice as she was, i'm sure she didnt want greasy chicken mc nugget hands all over her arm. This just made him want to touch her more. Luckily she thought he was cute! PHEW!


Twenty minutes in to the trip, Aidyn wanted me to hold him. Two seconds later he was asleep! Hip-hip Horray! or as Aidyn's been saying "yipee skipee"!!! We both slept the entire hour and seven minutes we had left! We touched down in MN, and were both very excited to see my mom/mama. So we grabbed our stuff, jetted off the plane, and headed towards baggage. Aidyn was thrilled to see mama, and so was I. :) Theres nothing like seeing family again!


Its been so great seeing the kids and spending time with everyone. I get to watch the kids today and they are so fun to be around... and speaking of the kids.. i'm off to enjoy them some more :)!

Heres some pictures from the trip... ENJOY!

at least some one reads these things.... 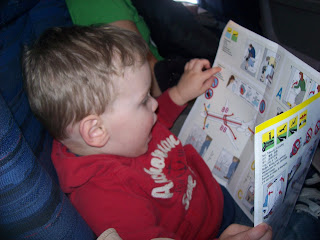 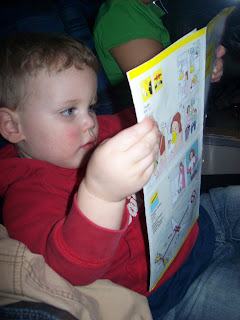 He finally got to see his grandma! 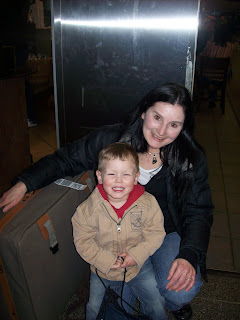 I am so glad you survived. Usually the things we dread the most, become the easiest to do.
Enjoy!!!

I hope your trip is happy & safe. Aiden is SUCH a cutie!!!

Thanks for stopping by my site. I hope you'll be back to visit:)